Manchester United’s hugely successful season saw them win both the Premier League and the FA Cup to become only the fourth club in the 20th century to win the Double. Only a 3–1 defeat to Aston Villa in the League Cup Final prevented them from winning a domestic treble.

They led the Premier League table from the fourth game onwards, and ended up winning the league by eight points over nearest rivals Blackburn Rovers, although their lead of the table had peaked at 16 points halfway through the season. French striker Eric Cantona scored 25 goals in all competitions and was voted PFA Player of the Year. Ryan Giggs, Lee Sharpe and Andrei Kanchelskis also hit the headlines with their brilliant form. In the FA Cup Final, United crushed Chelsea 4–0 thanks to two penalties from Eric Cantona and a goal each from Mark Hughes and Brian McClair.

Roy Keane justified his tag as the most expensive footballer in England by establishing himself as the club’s regular central midfielder alongside Paul Ince, while veterans Mark Hughes, Brian McClair and Steve Bruce continued to excel despite their advancing years. The end of the season saw the club’s longest serving player and joint captain, Bryan Robson, quit Old Trafford after 13 years to become Middlesbrough‘s player-manager. Also heading out of the exit door at the end of the season were Les Sealey, Clayton Blackmore, Mike Phelan, Colin McKee, and Giuliano Maiorana. Dion Dublin, who was unable to reclaim a regular place in the first team, was linked with a move away from Old Trafford for much of the season, but a move to Everton in November fell through and he was still at the club when the season ended.

With United’s squad arguably the finest in England, Ferguson’s only close-season signing was David May from Blackburn Rovers. May, 24, was signed by Ferguson in hope that he would develop into an eventual long-term successor to Steve Bruce. United also had plenty of strength in depth with promising teenagers David Beckham, Nicky Butt, Gary Neville and Paul Scholes on the verge of making a breakthrough. 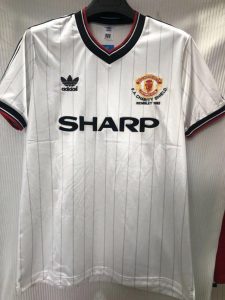