Featuring an eye-catching blue palette, the elegant black and white contrasting streaks are reminiscent of United’s trophy filled campaign.  The kit was embodies the unique United culture, with the famous badge enclosed within an embroidered circle above the iconic Sharp sponsor.

United clinched the Premier League title with 75 points – placing them seven points ahead of the three teams below them; Newcastle United, Arsenal and Liverpool.

New signing Ole Gunnar Solskjær was one of the biggest breakthrough stars in the 1996–97 Premier League season, with 19 goals in all competitions, making him the club’s top goalscorer. Twenty-two-year-old midfielder David Beckham clinched the PFA Young Player of the Year award in the same season he won his first England cap.

The season ended with a major shock as Eric Cantona announced his retirement from playing, prompting manager Alex Ferguson to search for a new striker. The search ended with the £3.5 million capture of Tottenham Hotspur and England 31-year-old Teddy Sheringham. 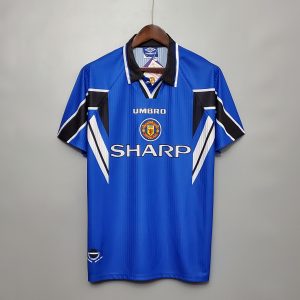